The Actuarial Values are used to design a health insurance plan that will pay on average the appropriate Metallic level percentage of the covered annual combined medical expenses submitted for a particular Metallic level health plans issued by an insurance company.

In order for the average to be 60%, some would get 80% and some would get 40%. What each person gets would depend on the exact composition of their medical bills. If the only medical services you received for the year were preventative checkups, your bills would be paid at 100%. 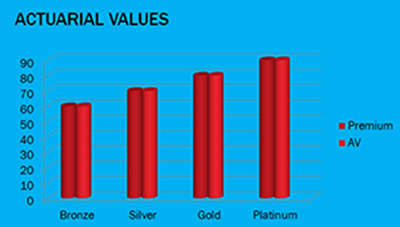 No one can offer the same insurance policy for less than we can.

Premiums are set by the insurance companies and filed with the state department of insurance.

No one can offer the same policy for less!